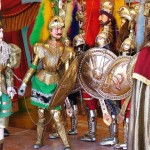 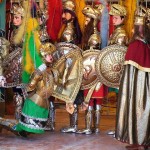 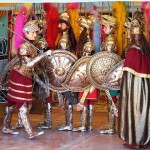 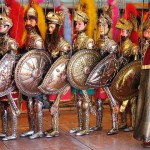 The theater of the sicilian puppets (called pupi) is a nineteenth-century tradition and it has been restored to its former splendor by Mimmo Cuticchio. The Sicilian pupo is a very old tradition. Its history goes back to 2400 years ago with the Symposium of Xenophon. It was called “Neurospata”, a Greek word that meant puppet. During the following centuries, other traces of puppets were found, but it was only in the 800 that their official birth is documented. During the Romantic period, the great poems of the literature of chivalry are rediscovered: plots woven of love, betrayal, spells and duels. The history of the Paladins of France became the bible of puppeteers. The puppets begin to be dressed with shining armor and so appeared the “cuntisti”, professional storytellers of the Carolingian cycle. The stories of Orlando were handed down by oral tradition from master to apprentice. You cannot leave Palermo without going, once at least, to the Puppet Theatre Santa Rosalia, created by Mimmo Cuticchio in 1973 in Olivella district, in front of the Massimo Theater. Later, in 1995, this Sicilian artist added a laboratory in which many artists realize new puppets. From the manufacture of the armor to the painting, from the sculpture to the costumes and the realization of the wooden heads, this laboratory is a permanent exhibition of this form of arts and crafts, of the texts and programs of the shows, a point of reference for students, tourists and citizens who want to understand a little more about this kind of representation before entering the theater. At a time when many young people used to change jobs and the traditions did not seem to interest anyone, Cuticchio’s choice seemed to be rather anachronistic. Since then, however, the Sicilian artist has created a school of art and enriched the small theater with all the necessary: stage, proscenium, curtain, deposit for the painted backdrops on canvas (more than 100), scenarios and special effects including rain, fog, smoke and other spells, while the sound is ensured by a cylinder piano. The repertoire goes on tour all over the world and it is very various: From the arrival of Angelica in Paris to Cagliostro, from the saga of the Paladins to the passion of Christ. In Palermo there is also the museum of the international puppet which shelters the largest collection of Sicilian puppets