Here is the list of events and festivals which take place in Sicily in March: 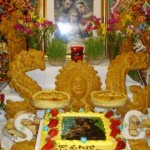 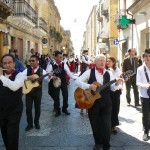 The carnival is celebrated until  4 March. For details, see the calendar of events of February

4 March in Francavilla di Sicilia (ME ): “The Cianciùta” : Traditional and hilarious popular farce symbolizing the “funeral” of the King of Carnival, symbol of lust and transgression.

08/09 March in Palermo : “The women of Palermo “: cultural day dedicated to women between events, walks, jazz concerts and art exhibitions

9 March in Catania : “A Fera Bio “: organic products directly from farmers , crafts , responsible tourism, fair trade, music and tastings, as every second Sunday of each month.

9 March in Castronovo di Sicilia : Feast of St. Basil Vitale: The “Triumph ” : the procession of Saint Elia , grand-son of the saint.

19 March is the feast of St. Joseph, the most beloved saint in Sicily . For the occasion, in honor of the saint, in many towns and villages of Sicily, altars are set up and decorated with typical votis loaves.  The ” tavuliate ” (large tables) are also set up in the streets for the traditional meal of St. Joseph . Here is the list of the towns and villages where  St. Joseph is celebrated :

From 17 to 19  March in Guliana (PA): Feast of Jesus Child – During the 3 days preceding the feast of Saint Joseph,  Jesus Child is celebrated. “U Bamminu ” is carried in the arms of local carpenters , at the homes of newlyweds .

21/23 March in Centuripe (FR) : Festival of the red Orange of Sicily. The town of Enna celebrates this delicious and healthy fruit for 3 days. Wine tasting and specialties made with orange .

21/23 March in Niscemi (CL) : The artichoke Festival – Wine tasting and typical dishes , guided tours , art and music , entertainment , crafts in the streets of the city.

March 22 in Scicli (RG) : Feast of St. Joseph. Appointment with the traditional folk ride with the historical reenactment of the Bible of The Holy Family fleeing into Egypt . A great parade of horses richly caparisoned in the streets of downtown .

Taormina (ME) : “Modellism in Taormina ” : exhibition of boats , trains, railroad . Date not confirmed

Piazza Armerina (EN): ” Medieterranea ” . Festival dedicated to gastronomy with the participation of confectioners and bakers from Italy , Spain, Israel, Morocco and from Turkey . Tastings of typical products . Date not confirmed

Trapani (TP) : Gourmet Festival “Carciofiamo ” . An ode to the artichoke. A plant with extraordinary organoleptic properties and whose versatility lends itself to any recipe. Date not confirmed

Valguarnera Caropepe (FR) : Festival of Ricotta . Flavors , perfumes , art and music in the heart of Sicily for “Carrapipi” which will take place during the celebration of Saint Joseph . Date not confirmed

Caltabellotta (AG) : Thanksgiving Day – Each year, in memory of the miracle of the rain that occurred in 1957, Caltabellotta celebrates  the feast of Thanksgiving , also known as the “Festival of Fimmini ” Date not confirmed