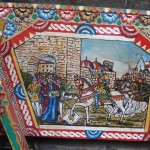 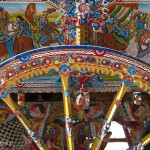 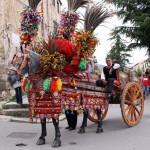 The history of the Sicilian cart was born in 700, when the only available cars were those of the landowners and were elegantly decorated. It was precisely these means of transport to suggest, a century later,to whose who could not afford them, the idea of decorating the cart, which until then had been a simple tool of work. The carts were in fact used by the “vurdunara”, muleteers working for the nobility to transport agricultural products. With the further development of the road network, the roads became more and more viable, and soon the cart became very useful to carry families during the weekend: It was enough to clean it up and to add a couple of wooden planks as seats. It was at this point, in the middle of the ‘800, that the idea of imitating the cars of the nobility was born. The farmers’ carts became the pride of their owners, painted with vivid historical scenes depicting religious, epic and romantic events. The scenes taken from the cycle of the paladins of France took over and since then the stories of Orlando and his paladins became the emblem of the Sicilian cart. Beautiful specimens are exhibited in the museum of the Sicilian cart in Terrasini.