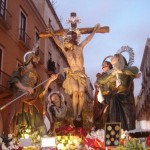 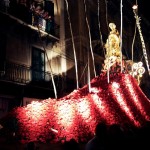 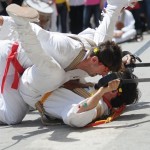 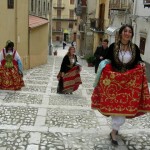 THE MYSTERIES OF HOLY FRIDAY (Trapani)
Goldsmiths, fishermen, gardeners, barbers, shoemakers, salt workers: they are all members of the ancient guilds that give life to the procession of the Mysteries. Each of these guild is entrusted with the care of one of the great sculptural groups to bring through the streets in procession on Good Friday, one of the most renowned religious manifestations of Sicily. Participants relive Jesus passion suffering and carrying the statues for 20 hours. The march with the rhythm of the music of the band, the so-called “annacate”, the steps by which the carriers swaying under the weight of the statues. Around midnight the procession arrives in the square, then continues his march until Saturday afternoon, when the Mysteries, one by one, with solemnity return to the church of the Purgatory

THE DANCE OF THE DEVILS (Prizzi)
Each year the traditional “Abballu of them diavuli” invades the streets of Prizzi, repeating the theme of the battle between good and evil. The devils are dressed in red and wear a deformed tin mask topped with a goat skin from which sprout sharp horns. The nose is hooked and the mouth is drawn by broken teeth. Since the early afternoon, the Devils are led through the streets of Prizzi by Death, dressed in yellow, holding a crossbow in hand with which indicates its victims among the passers-by. Souls have very few chance to escape from Death, but they usually give an offer to the organizers or a stop in the bar for a glass of wine and get reed of it this way. The real rite takes place in the afternoon when the statues of the Risen Christ and Virgin Mary are carried through the streets of the town and the hellish brigade makes every effort to prevent that they meet, creeping between the statues and dancing in a disorderly manner to the rhythm of percussion. The statues, however, approach slowly and the devils synchronize their steps to the carriers’ steps, as hypnotized by a higher power, until they are crushed by the statues and taken away by angels.

THE MYSTERIES OF THE MAUNDY THURSDAY (Marsala)
A parade of more than one kilometer, “preceded by the sound of a drum and a trumpet, the whole city is listening and especially watching, because on stage, through the streets of Marsala, is the story of Jesus Stations of the cross. It is the procession of Casazza”, as it is called in Sicilian, the sacred representation in which the performers are alive people and not groups of statues of the Mysteries: which for 300 years, invades the streets of Marsala each Maundy Thursday . Preceded by girls dressed in white, groups of figures walk in,procession: one of the sadder is Jesus carrying the cross to Calvary. Then Veronica with her charming maids whose faces stand out in a white veil that descends from a rich golden headdress, adorned with gems, pearls and filigree. The veil covers their hands and while they move in a sad way they seem haughty ethereal statues. The procession continues with the crucifixion group, then Christ died and the grieving mother: a large theater movement that profoundly unites religion and popular tradition

SANTA ROSALIA (Palermo)
In 1624, the inhabitants of Palermo were dying of plague. A violent epidemic that even the intercession of the four co-patron saints of Palermo – Santa Cristina, Santa Ninfa, Sant’Oliva and Sant’Agata – couldn’t tackle. According to the legend, a soap maker, Vincenzo Bonelli, during a hunting expedition on Mount Pellegrino, not far from the city, got lost because of a strong storm. Between the clouds and the rushing water, appeared to him the face of a young woman, Rosalia, who promised salvation for the city. She revealed to him the place where laid his mortal remains, the cave where she had lived as a hermit, and asked him to tell the bishop. So it is this way that Cardinal Doria Giannettino found the bones of Santa Rosalia and made her move at Palermo. The relics purify the city and since then, from 9 to 15 July of each year, the inhabitants of Palermo honor their Saint with the “Festinu”: A huge chariot carrying the statue of Rosalia is pulled through the streets of Palermo: a great work, an example of Sicilian fantasy and theatricality: about 10 meters high, it has the shape of an enormous boat. It houses 60 people, including the band dressed in eighteenth-century dress and it is preceded by “machines”, small carts which represents the life of Rosalie. The chariot leads the procession through the “Cassaro” (Corso Vittorio Emanuele) hailed by the crowd. The concerts, fireworks and sweets stalls in the Marina celebrate the Saint in a more profane way.

THE HOLY WEEK (Caltanissetta)
In Caltanissetta the most anticipated event of The Holy Week is the procession of the Royal Maestranza on Wednesday. All representatives of the guilds walk in procession accompanied by a funeral march. Each participant wear a suit, a bow tie and black gloves. After the ceremony which takes palce in the cathedral, the procession returns through the streets, but as a sign of joy now devotees wear white gloves and bow tie. The party continues in the afternoon and in the evening the boys carry in procession the “Varicedde”, small statues depicting the statues of the Mysteries who are marching on Maundy Thursday

FEAST OF THE HOLY CROSS (CALATAFIMI)
In May Calatafimi honors the SS crucified: a dark wooden cross, almost black, found at the end of 1600 and which has miraculous powers. Every year, on May the 3rd, the whole city walks in the parade, but every five years, when the finances allow it, to the ordinary celebration is added the “extraordinary” celebration. And this is the time that the citizens of 11 classes walk in procession through the streets. There are shepherds and goatherds, the clergy and the “sciabbica” (the people), but everyone is waiting for the more important classes: the workforce, which is the old militia walking with their rifle, then the bourgeois with their festively decorated mules, then the horsemen offering peanuts and almonds. Followed by the farmers, who from a chariot adorned with laurel branches, distribute “cucciddati”, the traditional breads

FESTIVAL TARATATA (CASTELTERMINI)
One day in May around 16:00, in a field near Casteltermini, a miracle happened: the oxen plowing knelt on the ground pointing to the place where an old crucifix was buried. The celebrations for the discovery, the festival of Taratatà, starts on the fourth Friday of May, but the highlight is on Sunday with the procession of the working class citizens. To open the procession is the royal workforce, followed by single men on horseback, then by the shepherds and finally by the bourgeois. Then to close the procession is the group Taratatà: for whom is reserved the most spectacular event, which brings to the city’s origin: Casteltermini was an Arab settlement and Muslim descendants take part in the procession honoring the cross with traditional dances. This is the Taratatà-armed dance in which the dancers perform in a sinuous duel by sword

THE HOLY WEEK (PIANA DEGLI ALBANESI)
In the middle of the sixteenth century, Alfonso of Aragon in Sicily called a brave military leader of Albania. The soldiers reached from the Balkans and settled in a place now called Piana degli Albanesi where five of the eight Albanian communities in Sicily still resides. Guardians of a precise consciousness of their origins, they maintain dialects, customs and traditions details, such as the celebration of the Byzantine Easter rite. Particularly interesting are the processions of Palm Sunday and Good Friday. On Easter, as a sign of joy, the women wear their traditional dress: skirts is embroidered with gold, hats, jewelry and belt with the typical San Giorgio representation