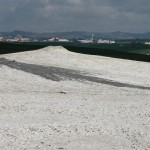 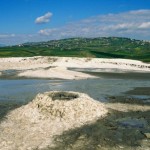 Macalube Nature Reserve of Aragon in the province of Agrigento: 1256 hectares of protected area, 4km south-west of Aragon and 15 km north of Agrigento. Its main interest is the hill of volcanoes, a barren piece of land with small volcanoes overflowing mud. The oldest evidence of the phenomenon dates from Platone, while Maupassant described it as a terrible disease of nature. A legend says that once, a city was buried under the hill because of an offense against the gods l. It is in reality sedimentary volcanism: gases (methane mainly) escaping through the subsoil discontinuities of the ground which drag clayey sediments and water due to the pressure and form for this reason cones of mud on the surface.