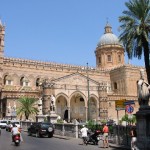 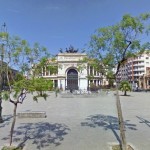 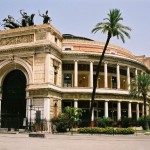 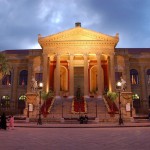 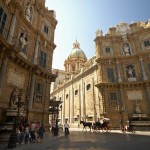 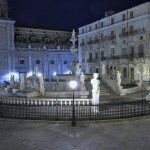 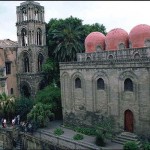 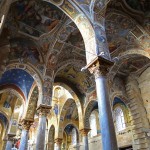 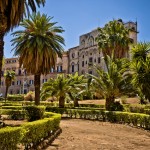 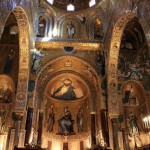 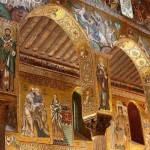 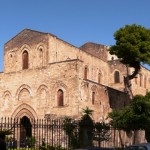 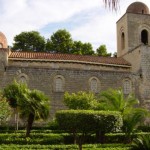 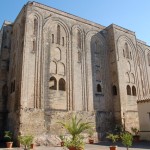 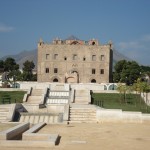 PALERMO, THE NORMAN CAPITAL
The kings of Hauteville endowed Palermo with parks, churches and palaces to create heaven on earth. On New Year’s Day of 1072, the course of history changed in the island. On that day, Robert Guiscard, of the Norman house of Hauteville, entering through Bab al Futuh (the door of Victory), conquered Palermo removing it from the Arabs. He promised a new glory for the city. What meant this promise for the Government of Hauteville is evidenced by the splendor of its architecture, a tangible symbol of the wonderful synergy between different cultures (Latin, Arabic, Byzantine, Jewish). A brilliant image policy, through which the Normans founded the most beautiful kingdom of the medieval times, which was able to captivate great travelers such as the Arabic Andalusian Ibn Giubayr who wrote of Palermo: “It has got all that you can desire of real and apparent beauty and satisfactions of life ….. “ The itinerary in search of the Norman inheritance runs between the sun and desolation, between delights and torments, between the power of imagination and the incorruptible beauty beyond any imagination. Surrounded by the peripheral landscape of Brancaccio quarter, there is the oldest Norman monument: the church of Saint John of the Lepers, founded during the siege of Palermo on a Sarasin ksar, with its red domes, the stern of the volumes and the African flavor of its palm trees. Not far away are the ruins of castle Favara, also called “Maredolce” because of the sources and the artificial lake that surrounded its painted walls, covered with gold and silver. The castle was originally built as a luxurious oasis of pleasures and amusements for the emir Giafar and was then inherited by the Norman kings with the taste of savoir-vivre. The ruins of the castle have finally been restored after years of neglect. Approaching the city there is the bridge of the Admiral, built by the powerful George of Antioch, illuminated amir al-bahr (admiral) of Roger II. The course of the river changed, and the bridge is now a beautiful monument without water incorporated into the traffic. In the historical center, celebrating the Norman period are three beautiful Christian churches. In the district of Kalsa you can see the church Magione which was elected “teutonic Mansio” by Emperor Henry VI, husband of Constance of Hauteville, and father of the “Stupor mundi” Federico II, which shelters a small cloister, a more intimate but as refined version as the one of Monreale. In the incredible roar of styles of Piazza Bellini, facing one another in a never-ending beauty contest, are the churches Santa maria dell’ammiraglio and San Cataldo. The first, a splendid game of historical and stylistic contamination, reserves many surprises, as the mosaics depicting George of Antioch at the foot of the Virgin and Roger II receiving his crown directly from Christ. San Cataldo, with the three red domes and windows with blind arches, is one of the most original examples of the Norman architecture, stretched between its austerity and the complexity of the mosaics of the floor. Walking in the city, you will see many Norman traces here and there: the mullioned windows via Protonotaro (perhaps the old convent of Constance de Hauteville) and the ancient tower of the Palazzo del Conte Federico, in via Biscottari. Then, reaching the center of the ecclesiastical power is the Cathedral, a formidable fortified church where you will be fascinated by the power of the sarcophagi of Roger II and Frederick II and by the rich two-tone inlaid decorations of the facade. A forest of palm trees divides the church from the Norman Palace, the royal residence that Roger II transformed, with the help of Muslim architects and craftsmen, in a graceful palace, divided by towers, roof gardens and fountains. You can still admire Roger’s Room, beautifully decorated with a series of mosaics, and the Palatine Chapel where Roger II was anointed king of Sicily, Calabria and Puglia. In this chapel is fully revealed the Sicilian-Norman political miracle translated into visual terms. In the extraordinary repertoire of decoration, the ceiling is one of the most amazing surprises of the monument: the decorations of the “muqarnas” “stalactites) of the wooden ceiling painted by skilled Arabs artists, do not represent the ethereal Christian paradise but the very concrete Islamic beyond, with a lot of dancers, libations and harmonies of lutes! Oriental influences from the Arabian nights which are also found in the church of St. John of the Hermits, a former hermitage, a former mosque and then Benedictine monastery. Five domes cover the church, a unique model of Norman architecture, since it is nothing but an adaptation to Christian requirements made by Moorish craftsmen. The almost entirely preserved cloister and the garden with exotic plants, orange trees, jasmine and roses are delightful. Even out of the city walls, the Norman kings, masters of the art of living, created their own Genoard (heaven on earth), a huge park full of every kind of delight. “You will see the most beautiful building of the most splendid of the realms of the world, including the seas and mountains whose peaks are colored with narcissus. You will see the pleasant room of the great King of the century which befits the magnificence and joy. This is paradise on earth which opens the eyes, these are the “Mosta-Izz” (ie eager for glory, the title adopted by William I and his successor) and this house is the Aziz (ie the beautiful). So it is written in “nashi” around the portal of the Zisa, the residence which William I had personally achieved in his garden of Eden. Among all the other buildings of the royal park, the last solatium (place of delight) of fairytale beauty erected in Palermo is the Cuba, a beautiful building in its decorative simplicity.